I was browsing through some old photos and I ran across a photo of my wife’s Uncle Moses When he was a much younger man and played catcher on a baseball team in Puebla in the early 40’s. 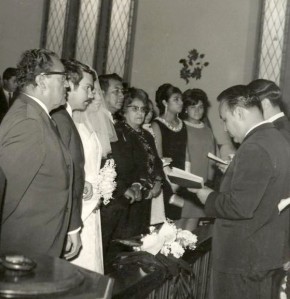 Uncle Moses was the best man at my wedding and a great guy. So I found this photo of him on the team but there was something else about the photo that caught my eye. I told my son, look at this guy standing in the back row wearing a hat, there’s something wrong with his face. 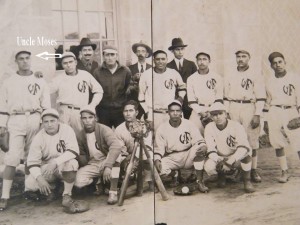 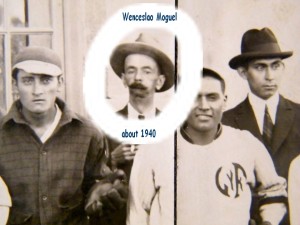 He looked at it and said, You’re right, it looks deformed like he has no chin. He said, I’ve seen this guy or a photo of him somewhere before. So he thought about it for awhile and said, You know where I think I saw him was at Ripley’s  Believe it or Not Museum in New York.
So we started searching through Ripley’s internet pages and sure enough we found some photos of the same Guy. It turned out to be a very interesting story.

The man who returned from his own execution

Back during the Mexican Revolution (1915) a young man by the name of  Wenceslao Moguel , whio lived in Yucatan, Mexico joined up with Revolutionaries fighting on the side of Venustiano Carranza gathered up a group of students to fight the opposing enemy, poorly armed and inexperienced they were captured and a Col. Ortiz ordered their execution by firing squad. Wenceslao was in the last group to face a squad of 8 soldiers and after a cigarette they fired 8 rounds into his body, he fell and the Col. Went over with a revolver and shot him in the head with a Coup de Grace shot.

Another battle was taking place so the bodies were left where they were. But Wenceslao wasn’t dead, although severly wounded he managed to crawl to the church of St. James Apostle three blocks away where a church member  found him, took him home a helped to stop his  bleeding cared for him till he recuperated. After the Revolution ended he became known as the miracle of the executed man who returned from the dead.  He traveled around the country and even to the USA where he was invited on the Ripley’s Believe It Or Not Radio Program in 1937.

He returned to his beloved Yucatan home where he lived to be 85 years old and he passed away about 1975.

Then I got to wondering, why was he at this baseball game. I think it was because he was paying a visit to Uncle Moses Father, )my wifes grandfather=, Major Rosalio Romero who had been in command of the military headqurters of General Carranzas troops stationed in Tlaxcala.

3 thoughts on “THE FIRING SQUAD”

Expatriate American,living in Tlaxcala-Puebla area for the last 49 years. Officially accredited Tourist guide for the State of Tlaxcala. View all posts by mexicomystic